Basically, a distinction must be made between validation tests and production tests. Endurance testing is a subset of validation testing. The testing of field returns after a repair has been carried out is – depending on the characteristics of the product and the production process – possibly another test requirement. This is not a new validation test (type test). However, it may not be possible to perform such a test task in the production plant. Often, the solution here is to use the test system that was used for product validation – but with a significantly reduced scope of testing.

First of all, it must be clarified which aspects (specification points) are to be verified in which test arrangement. This concerns on the one hand the UUT itself and on the other hand the test environment required for this. 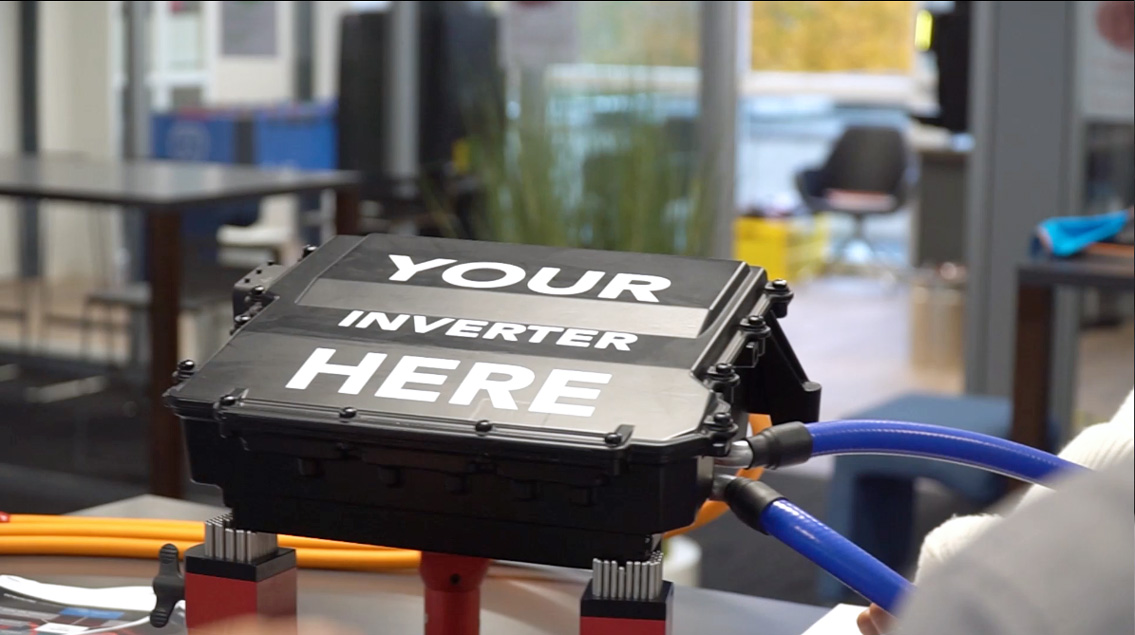 Due to the high power, voltage and currents typically controlled by a drive inverter, there is a tendency to completely dispense with the power components of the device for the test process, since commercially available hardware-in-the-loop systems (HiL) are only available in the small-signal range (signal HiL). This greatly simplifies the test setup, but the tests also lose a great deal of significance with such an approach. In this case, the original UUT is heavily manipulated (“cracked-ECU” method) and all parts of the UUT that come into contact with electrical power, high currents or high voltages in any form are removed or deactivated.

The lost functions of the UUT are then replaced by models (in hardware and software) in order to “simulate” a closed function. Thus, hardly any hardware remains of a power inverter for the test process and the UUT being tested no longer has much in common with the original UUT – usually only the (manipulated) computer card. Security-relevant tests are not possible in this procedure, since the UUT has lost its original character and therefore valid statements are no longer possible. Nevertheless, basic questions regarding controller architectures, software functions or simply the signal routing of the processor card can be answered sufficiently well with this test procedure. However, more extensive validation tests on the entire power electronics are not possible with such a test setup.

Mechanical test setups and the lack of test depths

In order to fully validate power electronic components – in this example a drive inverter – during development (hardware and software), it is necessary to implement a suitable test environment that creates sufficiently accurate real conditions at the interfaces of the inverter. On the DC supply side, this can be done by the real high-voltage battery and on the phase connection side by the real e-motor, whereby the e-motor must be flanged to a dynamometer for the purpose of load scenarios. In principle, a setup is also possible in which the dyno is replaced by a second electric motor (load motor). The disadvantage of these mechanical arrangements is that “real” components (battery and electric motor) are used. A real battery brings with it a considerable potential for danger, aging effects, thermal tasks, charge states and many more undesirable side effects. Therefore, it is recommended to replace the real battery for testing the power electronics by an emulated battery, a so-called battery emulator. For systems using a fuel cell as energy source, the fuel cell should accordingly be replaced by a suitable DC source. Similarly, the same problem arises on the AC side of the drive inverter. A real e-motor has to be loaded appropriately, suffers from copy scattering, thermal effects, wear and just many “side effects” which are undesirable when testing the power electronics. In addition, the e-motor is often not available in time because it is still in the development process or only available as a prototype.

The central problem when testing with a real e-motor, however, is that an inverter/e-motor integration must take place at a time when actually only the power electronics component is to be tested – independent of the e-motor. Thus, with a mechanical setup, two levels of complexity clash: the electrical level of the inverter with the mechanical level of the e-motor. Testing of inverters thus becomes lengthy, unnecessarily complex, and still allows only a poor depth of testing. For example, in such a mechanical setup, testing of fault responses can only be done inadequately. In addition, a dynamometer always has only limited control dynamics and, for example, load torques oscillate at very low speeds. On the part of the test object – the inverter – a functioning motor control must already be implemented in order to be able to carry out the first tests successfully at all without damaging the test object or the e-motor. 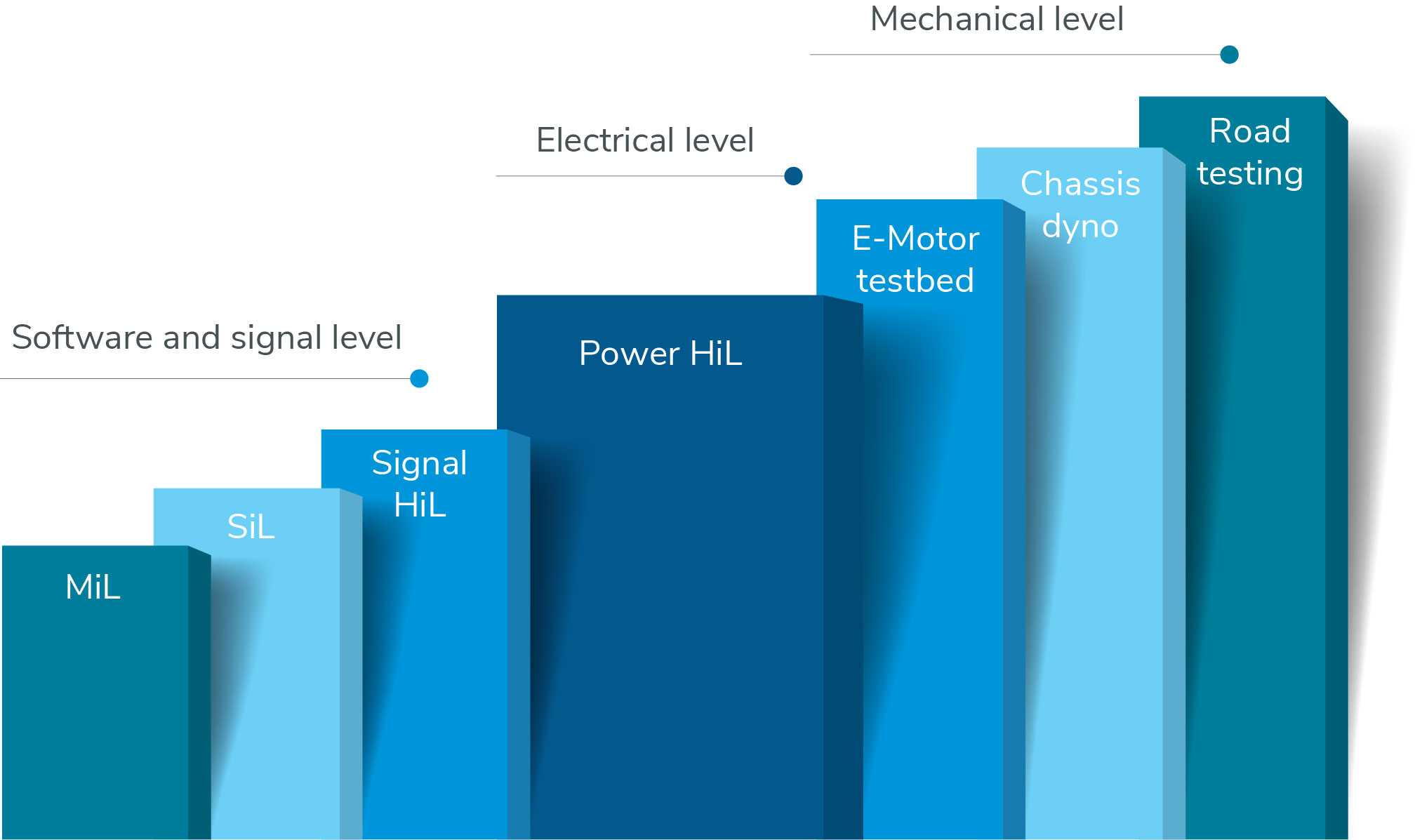 So there is a glaring “gap” between these two test approaches. From a signal HiL setup to testing the inverter with the real motor is a big step with many uncertainties:

The solution to this dilemma is to replace the real e-motor (like the battery) with an e-motor emulator that exactly replicates the behavior of the e-motor at its connections. This test solution eliminates all the disadvantages of the signal HiL setup. The inverter does not have to be manipulated for the test and can also be tested with the full power parameters. The battery and the e-motor are both being emulated and are not required as hardware for the test. Interfering mechanical or thermal influences from real components then no longer exist and, if required, can simply be emulated. The protection of the UUT during the first tests is optimal, because the phase current can be limited by the e-motor emulator. The UUT is not manipulated and is in an emulated environment where other connected components are realistically simulated on the electrical level.

When using an emulated environment, the accuracy of the emulated components – especially in the case of e-motor emulation – is of central importance. Deficiencies in the fidelity of the emulators have a strong influence on the test results and deviations between the real and the emulated e-motor can lead to validation tests not delivering reliable results – i.e. they are unusable.
For this reason, AVL SET’s e-motor emulators have been developed in such a way that accuracy is guaranteed: emulators very precisely reproduce the behavior of the electric motor in both static and dynamic operation. In this respect, these emulators can be reliably used for the full rang of power electronics test applications that were previously carried out on a real e-motor. 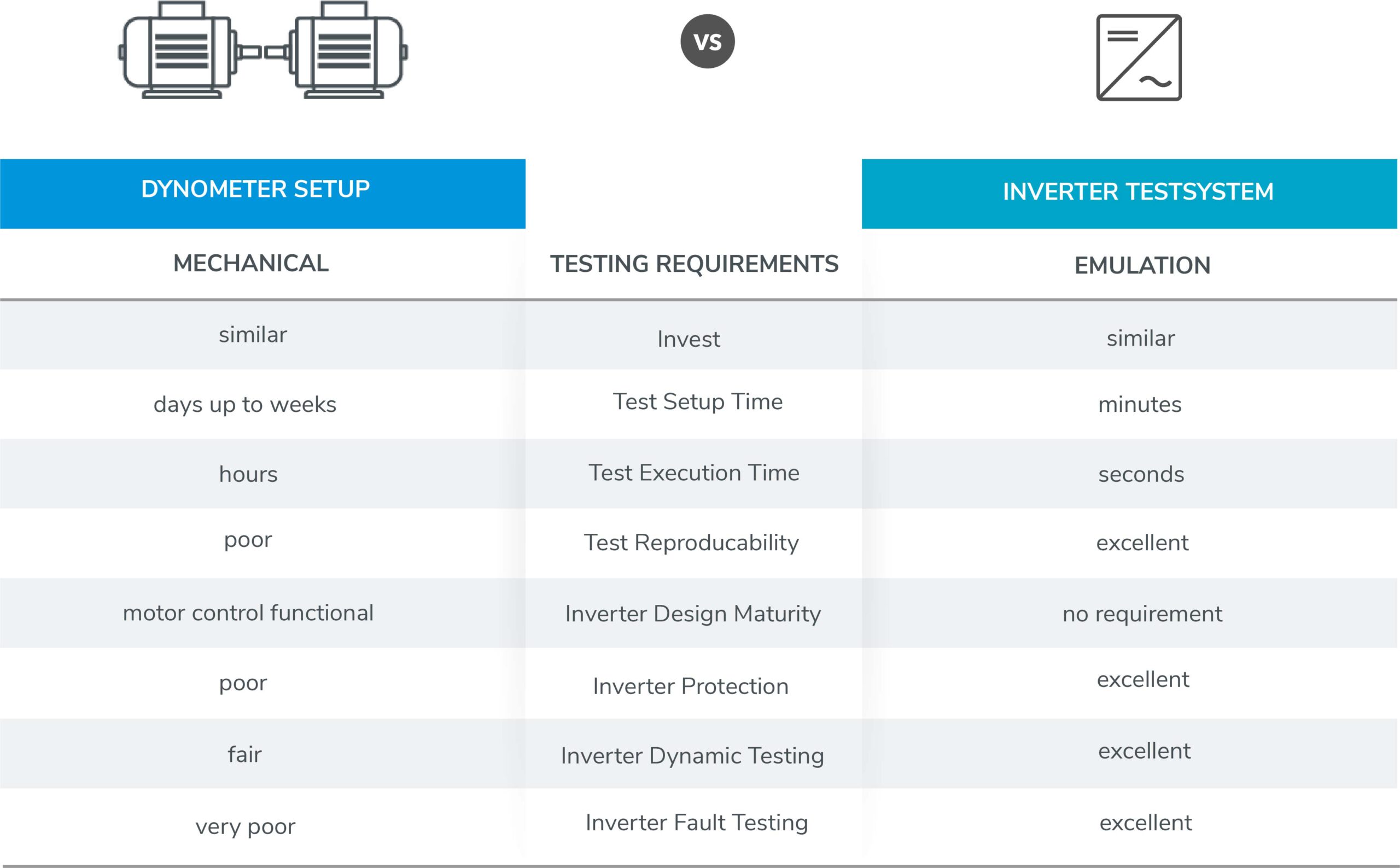