Why did you decide to make this apprenticeship?

After I dropped out of my studies in information technologies in the second semester, I wanted to start an apprenticeship. That fore, I looked at all the apprenticeship possibilities, together with the respective activities. In the end, I decided to become electronic technician because within the apprenticeship I found all of those topics, that I liked in my studies (balanced activities with a lot of manual work).

Tell us about your application process?

I applied in writing and following received a job-interview invitation. After that I was allowed to do a week of trial work. After the trial period, I was accepted very quick and able to start working as intern right away until the official start of my apprenticeship.

Which expectations did you have before your apprenticeship and have they been fulfilled?

In general, I was surprised very pleasantly. At first, I expected to take on tasks as an apprentice that no one else wanted to do and were rather simple. However, I was quickly given my own tasks which I worked on completely independently and was also allowed to help other colleagues with development projects.

Which departments did you get to know during your apprenticeship?

During my apprenticeship, I worked in all technical areas, i.e. production, development, design and service.

“My favorite projects were designing a needle tester for circuit boards, creating and manufacturing various adapters, and of course the numerous 3D printing projects…” 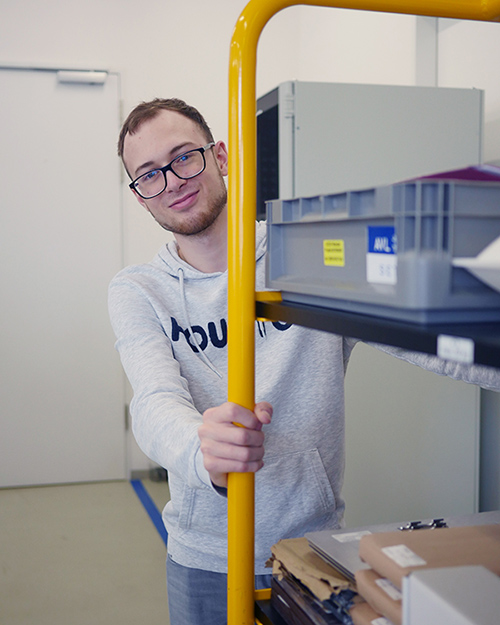 What projects did you do during your apprenticeship and what did you like best?

Tell us about your typical work day?

Hmmm, well I can´t really describe a typical workday because the day can be very different depending on the department and projekt I´m working on. So far, it´s been everything from pure paper- and office work to field service.

Which tips would you give to a new apprentice?

Don´t be afraid to contribute your strenghts!

join us and shape the future of sustainable mobility! If you Can´t find a fitting position here, you´re welcome to take a look at the positions at AVL List GmbH.